When you mention Boston people automatically think of Boston USA, but this is the original Boston, little old Boston, Lincolnshire in the UK. Land of the Pilgrim Fathers and what better way to view it but from the top of our beautiful church St. Botulphs, affectionately known as 'The Stump'. 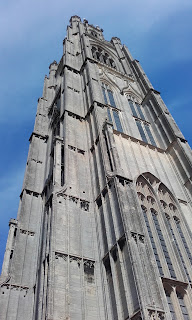 It sits majestically in the centre of the town, overlooking the market square that bustles on a Wednesday and a Saturday. When people come from the surrounding villages to buy there fresh fruit and vegetable along with many other items.

It is 209 stone steps up to the viewing gallery and well worth the effort. During WW2 it was used as a look out by the Air Wardens. 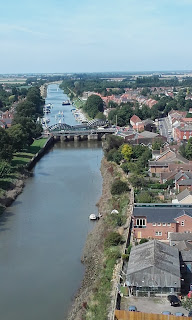 The River Witham ambles through the county arising near Grantham, through Lincoln and Boston and ending up in the Haven, the tidal part of the Wash. It is on the banks of the Haven stands a memorial stone to the Pilgrim Fathers, commemorating the attempts of the Scrooby Congregation in 1607 to escape to Holland. This was twarted but they were the precursors of the Pilgrims that later escaped to America. 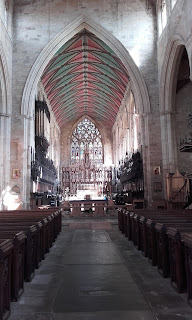 'The Stump' is the parish church of Boston and the building of the existing church began in 1309, but remains of earlier churches have been discovered dating back to the Norman times. Legend has it was built on the site of a monastery founded by Botulph in 654.
The tower was not begun until 1450. There were structural problems due to the Stumps close position to the River Witham, but when they eventually completed it it stood a staggering 272 feet high (83m)