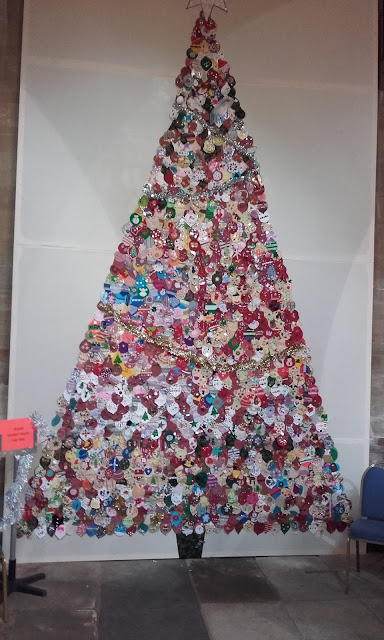 Today we went to the Horncastle Christmas Market. Thankfully the strong winds from Storm Desmond had died down and the market square was filled with people.
Singers sang carols, Banovallum Brass were playing seasonal music, there was folk and jazz, hot dogs, burgers made from beef,ostrich,wild boar and kangaroo.
Many of the shops had opened and you could browse the antique shops.
Over in the church was a Christmas tree festival. There were 51 in all and they were all sizes.
This one was huge it had to be nearly 12 feet tall  and covered with paper Christmas Baubles decorated by the local primary school. There was a competition as to how many were on it. I would estimate there must have been nearly 3000 baubles. It was beautiful. 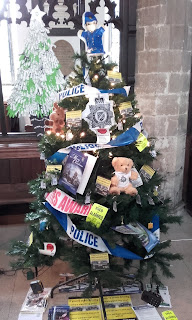 There was one decorated by the local police, one by a local knitting group. The thought that had gone into them all was amazing. Next door was the Horncastle Community Centre. The two halls were full of  Christmas crafts stalls and competitions and we enjoyed a sit down and a hot drink. Luckily we missed the sharp downpour and emerged later in the dry.
We wondered around the Sir Joseph Banks Centre, a cavern of crafts. Sir Joseph Banks was a famous botanist that that was best known for his journey with Captain Cook on HMS Endeavour. He was born in London but brought up on the Revesby Estate. It had been bought by his great grandfather back in 1714 from the Howard family. 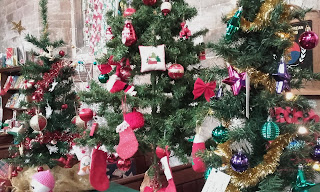